Changes the transparency level associated with a layer. Enter a value from 0 to After specifying a transparency value, the following prompt is displayed:. Attaches a material to a layer. The material must be available in the drawing before it can be assigned to a layer. Controls whether visible layers are plotted. If a layer is set to plot but is currently frozen or turned off, the layer is not plotted.

When saving a layer state, you specify which layer settings are affected when the layer state is later restored. Restores the state and property settings of all layers to previously saved settings. 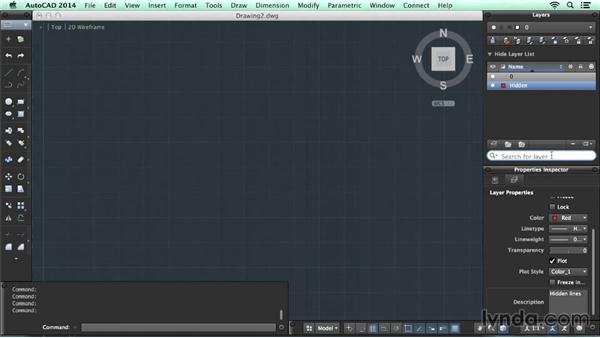 Instead of turning all the other Layers off — you can lock them instead, just follow the options at the command prompt. This tool was also new in AutoCAD or with the subscription bonus pack. Instead of isolating the Layer of the selected objects, it isolates the selected objects themselves. Every other object in the drawing is made invisible, even if they are on the same Layer as the object you selected.

This is really a group of commands, the easiest way to use them is to select the objects you work with and right click:. Note : Object isolation does not remain between drawing sessions, so if someone else opens your drawing, all objects will be visible by default.

The current object Isolation state is highlighted by the little light bulb icon in the task bar. Yellow means that all objects are visible, red means that some objects are hidden.


You can also click on the Isolate objects light bulb icon to change the visibility state of objects. You just need to run the command and pick on the Layers you want to lock… simple! By the same token, although you can set Layers to be frozen or thawed and on or off in the Layers pull down, it can be more intuitive just to point and click.

Phew, that was a long post. If you made it all the way to the end, I congratulate you! Thanks for sticking around.

You can now consider yourself a Layer productivity expert. Go forth and create geometry, and never use the Layer pull down again! Read this post to find out how to create and edit AutoCAD layers. Would it be possible for you to post a description of the problem you are having with the script you have so far on the Autodesk forums? This is a difficult thing to check for with a script. Thanks for the reminder. Is there a way to make the dialogue box for the layers properties wider? If I copy and paste a block, the pasted block ends up in the current drawing layer, rather than the layer the original block was in like it used to.

Could you start a thread in the Autodesk forums, outlining the steps you took — with screen shots or a troublesome file attached?

Please post a link to it here and I will check it out. In drawings that support 3D modeling, frozen layers are not rendered. Locks and unlocks the selected layers. Objects on a locked layer cannot be modified. Objects on locked layers appear faded and a small lock icon is displayed when you hover over the object. Displays the lineweight associated with the layer. Clicking the lineweight name displays a drop-down list with the available lineweights.

Displays the linetype associated with the layer. Clicking the linetype name displays a drop-down list with the loaded linetypes. Choose Manage at the bottom of the drop-down list to display the Select Linetype dialog box. Controls the visibility of all objects on the selected layer. Drag the slider to adjust the transparency of objects on the layer. The higher the value, the more transparent the objects appear. Controls whether the selected layers are plotted. If you turn off plotting for a layer, the objects on that layer are still displayed.

Layers that are off or frozen are not plotted, regardless of the Plot setting.

Displays the plot style associated with the layer. Clicking the plot style name displays a drop-down list with the available plot styles. Freezes selected layers in new layout viewports. If you later create a viewport that requires dimensions, you can override the default setting by changing the current viewport setting.

Override settings are not visible in the viewport or plotted when the visual style in the drawing is set to Conceptual or Realistic. Lists all columns by name. A check mark indicates that the column is included in the display. Click a column name to display or hide the column. Changes the width of all columns to fit the content in each column. Changes the width of the selected column to fit the content in that column. Sets all columns to their default display and width settings.